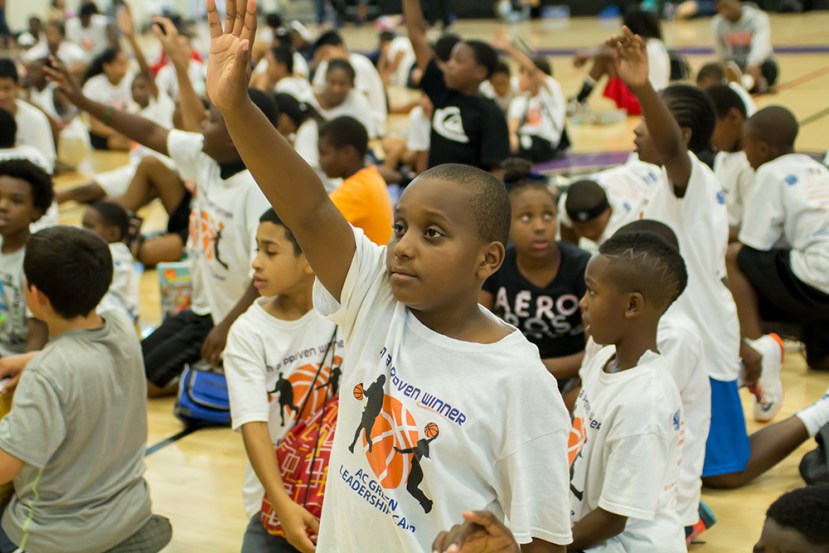 A.C. Green aims to teach skills of life
Originally published 8/9/96 in The Arizona Republic, written by Jim Gintonio.
Used with permission. Permission does not imply endorsement.

Green, perhaps the NBA’s most atypical player, was down on his knees on the basketball floor, looking the youngster in the eye. That they were communicating on the same level and that Green was making a connection was obvious.

An onlooker just shook his head and said. “He’s one of the few stars who would take time to work like that with kids. This is an experience these kids will remember for the rest of their lives.”

Basketball is a big part of the proceedings, but it’s the other aspects of the camp that excite Green, signed by the Suns through the 1998-99 season.

“Just a regular basketball camp has a purpose if you just want to teach basketball skills,” said Green, who has a daily prominent role. We want to teach life skills. That’s why we set up these camps.

“We stress leadership and help gear kids toward the right values and help them make good decisions.”

Green realizes that almost every youngster who passes through one of his camps probably dreams of a lifetime of adulation and riches. Most won’t make it, and there’s nothing wrong with that, Green says.

It’s the fact that most of these kids come from poorer backgrounds that gives Mike Driscoll, a former high-school coach in the Valley, a nice feeling about the camp.

“This is really for kids who are usually left out of everything,” he said. “A.C. wants to be the leader of this camp, and he’s here all week. He wants the kids to hear his voice, and they do.”

Earnest Turner, a family counselor at the Arizona Boys Ranch who brought some of the school’s students to the camp, was enthusiastic.

“Anything you can do to help kids is great,” he said. “He (Green) chooses to do something for kids, and that’s great.

“This really is a lot more than just a basketball camp. He shows the kids…that he can be a coach, a friend and a father figure. I guess I was a little shocked at first that he sat there and had conversations with them. Some of the big-time athletes get a chip on their shoulder.”

A chip on his shoulder is something that Green, who has become well known for his views on sexual abstinence, never had, according to one of the coaches who recruited him to play at Oregon State.

Steve Seidler, now a teacher at Central High School, directed the basketball operation at the camp. He said he knew Green was the type of athlete he wanted at OSU.

“When you’re voicing your beliefs at a time when it’s not the thing to do, it tests your faith,” he said. “You can wilt under pressure or be strong. A.C. was always strong. I’ve known him since 1981, and he’s a tremendous individual.

We liked the type of person he was when we were recruiting him. He was always a settling influence on the team.”

Seidler and the other volunteers are proud of the fact that the youngsters who show up at Green’s camps are similar in many respects.

“All the kids are top-notch,” Seidler said. “They’re disciplined and well-mannered. As for the coaches we pick, we want someone who fits into what our beliefs are.”

Green knows the type of work it takes to be a volunteer at his camp.

“We appreciate everyone, even if they can come for only a day,” he said. “It’s important for kids to see that other people are here to support the leaders of tomorrow.”

Green has never strayed from the beliefs that were instilled in him as a youngster in Portland.

“Anyone who is in this position, or even is older than the kids, is a role model,” he said. “The question is, will you be a good role model or a bad one.”

One way he makes that point is by not disappointing the youngsters in the camp.

“I’m here every moment,” he said. “It’s not the type of camp where I just make an appearance. It’s my camp, and my name is more important to me than riches.”